Fannie Lou Hamer, the legendary freedom fighter who struggled for justice in Mississippi, was also a member of a special 1964 Student Non-Violent Coordinating Committee (SNCC) delegation to Guinea. It was her first opportunity to travel to Africa and she was awe-struck by the people. She was moved to tell Kwame Ture: “they stand and talk just like we do Stokely!” Many Africans see the similarities and historical connections between African foods, dances, forms of spiritual worship, superstitions, wisdom, logic, etc., as clear evidence that we are one people – a global people.

Whether in Accra, Ghana; Dar Es Salaam, Tanzania; London, England; Toronto, Canada; or Los Angeles, California if two African women who share a mutual fondness and respect encounter each other after a long separation, the nature of the emotional exchange will be familiar to Africans everywhere whether the women speak Twi, Kiswahili, French, or English. If one enters a nightclub in any country, the mannerisms, non-verbal communications, etc. of Africans’ social encounters will be similar. You are just as likely to hear Cardi B and Beyonce in Africa as you are in the U.S. because their cultural expressions resonate among Africans everywhere. The experiences of riding on a trotro in Ghana and a Rapid Transit Bus in L.A. are very similar. In fact, the average African from the U.S. who goes to Africa, or the average African from the Caribbean who goes to Europe, will be approached by Africans who assume the visitor is a local. There is nevertheless an organic connection even after the visitor’s actual place of residence is disclosed.

We make the irrefutable point that Africans born and living in over 120 countries worldwide, are one people, regardless of different languages, geographical locations, challenges, conflicts, etc.

As Kwame Ture pointed out, Africans are the only people on Earth who wear clothes, sing songs, etc. representing our common connection to Africa. You are not likely to see a cake in the shape of Europe or Asia, but we have all seen cakes shaped like Africa because on a conscious and unconscious level, our people recognize our common thread and connection to Africa as a vehicle that leads to our complete liberation as a people. 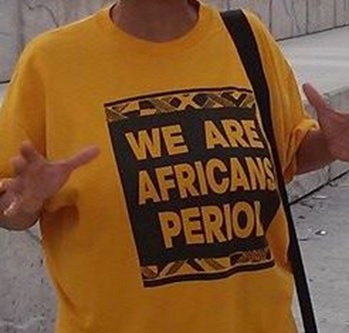 Even the enemies of African liberation have been conscious enough to exploit the clear and objective Pan-African reality that exists among us. During the imperialist efforts to steal back the Congo after the assassination of Patrice Lumumba in 1961, the U.S. Central Intelligence Agency, in conjunction with British M16 Intelligence and French and Belgian intelligence, engaged in concerted efforts to sabotage efforts by Lumumba’s National Congolese Movement to gain liberation for that country. One of the confirmed strategies imperialism utilized to attempt to accomplish this was to import Africans from outside the Congo e.g. Africans from the U.S., so-called Cuban exiles, etc., into the Congo to pose as Congolese fighting against national liberation. This tactic was implemented to attempt to create the illusion of Congolese opposition to liberation within their country.

Several of the mercenaries in the Congo were exposed once they were captured and it was quickly discovered that these people didn’t speak Lingala, Ki-Swahili, etc. They only spoke English or Spanish which would be impossible if they were Congolese. What if instead, these Africans were fighting for Africa’s liberation? The achievement of Pan-Africanism (one unified socialist Africa) creates the potential for an international fighting force of African people who are organized and committed to waging a relentless nation, class, and gender struggle against capitalism and imperialism everywhere in the world to liberate Africa as our base of operations.

Africans’ problems didn’t start in the Dominican Republic, Brazil, Honduras, Canada, or the U.S. They started when Africa was exploited and Africa’s people were enslaved and forced into exile throughout the world. It is therefore likely that Africans in the U.S. have family members in Somalia, Canada, Puerto Rico, etc. So, this reality makes it absurd to suggest we are not the same people. It is equally absurd to suggest that we should remain divided and powerless. What we need is continued comprehensive political education that prioritizes a shared understanding that our futures are directly tied to Africa’s future. The only homeland African people have any legitimate right to claim is Africa. Why fight for Africa’s liberation? Africa is the richest material land base on Earth, yet African people are among the poorest people on the planet. This is not an accident, but it is a direct consequence of the domination and exploitation of Africa. Saying it differently, capitalism in blackface e.g. Barack Obama in the U.S. or Paul Kagame in Rwanda, is not the solution. The solution is Pan-Africanism: The total liberation and unification of Africa under scientific socialism.