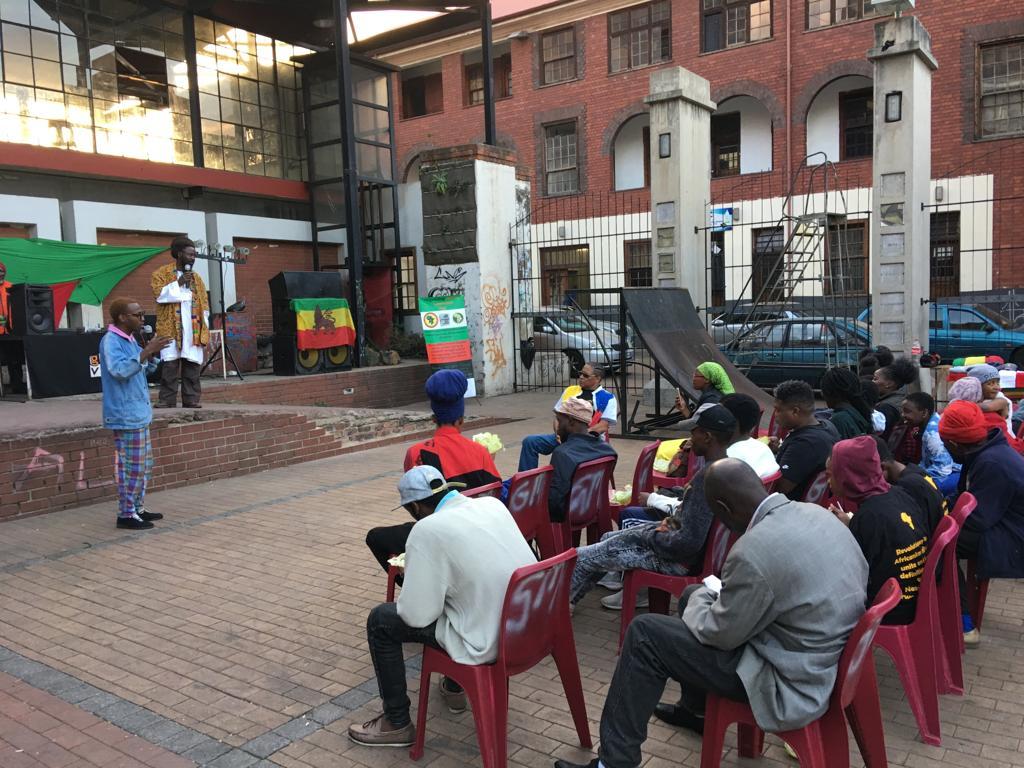 I was one of the presenters at an Africa Day Festival in Gauteng at the Drill Hall CBD and it was an interesting day in several respects. The gathering was to celebrate a Day that should be celebratory in essence and should be joyous because the oppressed have been freed.
It was a sad bittersweet day and I think the location reflected that. The Drill Hall is in Twist Street and is a historical hall where the British and Afrikaner troops drilled and kept themselves in top form to oppress, murder and dispossess the the people’s of the land and ironically the location reinforced the oppression rather than the liberation.
Twist Street is in the centre of Joburg CBD and it’s almost in the heart of Hillbrow and throngs of humanity rush hither thither trying their best to eke a living from the hand of the same oppressor that rendered them to the state that they are in now.
The overarching feel of the area is squalor and hopelessness that at the same time is offset by entrepreneurs and hawkers plying their trade independently to live off the squalor and hopelessness and to me symbolises a rose growing in concrete against all odds.
As I waited for the organisers to get themselves organised I watched some kids playing a round with skateboards trying the different tricks that kids and thoroughly enjoying it even  within the squalor and grime. Overshadowing it all stood high buildings owned primarily by whites with “To Let” signs all over or “For Sale” and I wasn’t quite sure if it was the people who were for sale or the buildings because the historical slavemaster sold both in his mercenary drive for wealth.
As the place filled up it was mainly children with bright open faces that somehow smiled in this overarching misery and squalor and felt that there was actually something to smile about and I envied them for their innocence and ability to see joy where I saw pain.
As the even started it opened with a dance in memory of the KhoiSan and it was very touching because it was driven to honour me as a KhoiSan and honour the memories of our people and our connectedness to each other.
The performance was vibrant and the kids really enthusiastic and their smiles and vigour made an indelible mark on me and my thoughts strayed to those who created and drove the position that “they hated us”!
Here were a people honouring and remembering us and we dismiss this as we form laargers that isolate and insulate us from greater humanity. For me this was the tragedy within a tragedy and irony at its worst.
When my turn came to present I presented my anger at how the world went on spinning uncaring of the poor and the oppressed and how uncaring god’s didn’t seem to give one fig for the armies of drug addicts that filled the spaces just across the block and wandered around like zombies oblivious to where they were free or imprisoned in both their minds or their physical state of being.
I articulated the position that we should and must be angry at out betrayal and renew the commitment to struggle for a better tomorrow and change this skewed and unjust state of existence that we and they were trapped in.
It was pleasing to note the responses from the youth in the question time and it showed a spark of awakening in a world where poverty is an identity and taken for granted.
The absence of “liberation” from Africa Liberation Day was a stark reminder of the wiliness of the oppressor who sanitized a liberation Day that should rightly get us re-evaluating our so called freedom and commercialising it in not different a manner to Black Friday and it’s twist to commercialisation that benefitted the oppressor not the oppressed.
As I drove away from the poverty and squalor into the middle class neighbourhood of wide pavements, well tended laws, fences and crime it made me shake my head in despair and made me even angrier at the politicians who had displays worth millions yet here in the inner city are people who needed help and never knew liberation but in spite of that could still smile and be the roses in the concrete.
This reinforced my resolve that that struggle for liberation must be heightened and sharpened so that one day the smiles on the faces of the children with be because of their freedom not an illusion that left the new oppressor sharing the dreams of the youth with the old oppressor.
We are not free until the children are free!!!!
_______________
Rassool Jibraeel Snyman
Khoi Liberation Movement
World Wide Pan African Movement
Posted in News