As the momentum towards African Liberation Day 2021 gains steam, various members of the All-African People’s Revolutionary Party (A-APRP), the Pan-African Revolutionary Youth of Guinea-Bissau (AJOPAR) as well as school children in different areas of Africa are increasing awareness around the theme this year via photo messaging with signs of the theme. Members from seasoned cadre to newer youth, in various parts of Africa and the diaspora have so far contributed to the initiative.

Others are encouraged to join this initiative by taking a photo of yourself and/or others with a printed or hand written sign/poster with the ALD 2021 Theme: “Forward Ever to Worldwide Pan-African Unity“. Photos can be submitted via email to contact@africanliberationday.net

Where possible, please wear white clothing in the photo(s) and indicate what part of the world you are in.

Members of the Revolutionary Socialist League (RSL) and the All-African People’s Revolutionary Party (A-APRP) held a preparatory meeting ahead of African Liberation Day 2021 edition. Because of the national emergency orders around #COVID19 currently operating in Kenya, ALD will be done virtually on 25 May 2021. 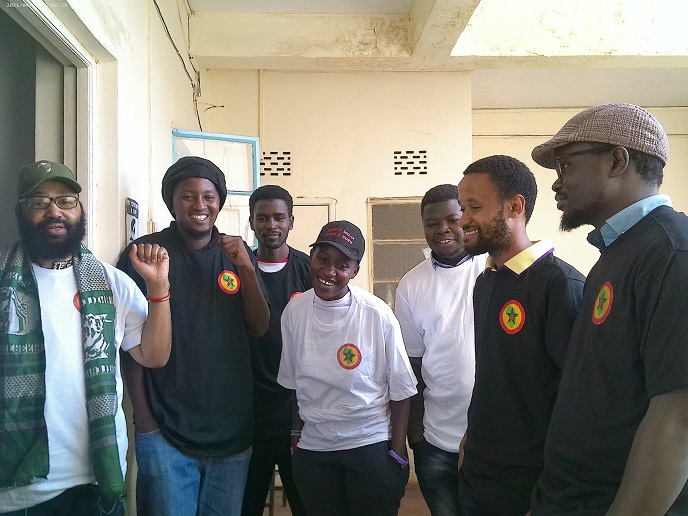 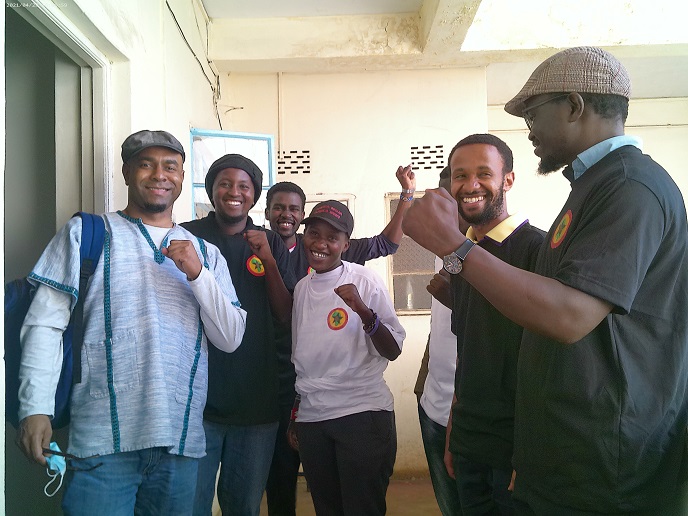 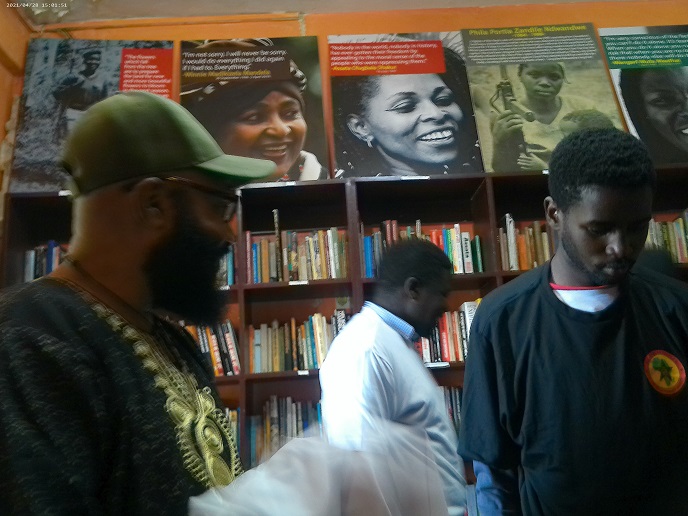 The fight waged by the African Peoples to gain their full sovereignty and their total emancipation is far from being spontaneous. The Revolutionary People of Guinea gave the liberation struggle a sense of purpose, presenting the militant action for the People successively in terms of political independence, economic development, and social progress. However, the question of the United States of Africa is still topical after the heroic efforts made by the founding fathers for the creation of the Organisation of African Unity (OAU), which later became African Unity (AU). It is a challenge for the next generation to make the United States of Africa a fact of life, a reality.

The Cuban question, without any doubt, continues to weigh down the relations between the United States of America and Latin America. The continuation of the paranoiac policies adopted for nearly sixty (60) years seems unavoidable. Barack Obama had already liberated the financial flows between the two countries, and granted Cuban exiles the possibility of getting to the island more easily; a new step had been taken, but not all is settled so far, as the new tenant of the White House is unpredictable, and the image portrayed of Cuba is implausible; socialism is lambasted by the reactionary press. The proud Cuban People fight, and will continue to fight for a complete socio-economic rehabilitation.

B.    Sanctions on VENEZUELA:

Sanctions imposed on Venezuelan oil and exports up to this last political crisis have destabilised the Venezuelan economy. It is up to each People to undertake viable measures for their own development. We have confidence in our brothers in Venezuela, despite the fact that these sanctions have led to the systematic importation of basic products, which have stifled the development of modern agriculture and the growth of SMEs. Because Venezuela remains dependent on its oil revenues. All these deficiencies are all the more glaring as the world food crisis hit the country today, as a consequence of the sanctions. If the new American administration had plans to ease its relations with Venezuela, these have already been scuppered by the current political situation with comrade President Nicolas MADURO, who is holding on in the face of attempts at economic destabilisation. However, “Chavism” is still a victim of imperialism.

Zimbabwe has been hounded for decades. The land reform by and for the People and against white farmers, initiated by the Mugabe government, provoked the merciless reaction from the exploiting powers. The seizing of agricultural land by the government conditioned the currency devaluation and the rampant inflation of a currency fully dollarised since 2009. The country was slowly sinking into crisis while food was lacking, and schools, hospitals and all public services were falling apart; its opposition seemed to expect more from Western powers than from African neighbours. A hero of independence and a great slayer of neo-colonialism, the thunderous Robert Mugabe impressed so many people. We hope that the current President, Mr Emmerson Mnangagwa, will do better.

It has to be recognised that all sanctions must be lifted, as all Peoples are sovereign on their own territory, and no People have the right to impose their domination on another, because men are born and remain free and equal in law.

Whether it be Cuba, Venezuela or Zimbabwe, no power has the right to prevent these Peoples from enjoying their wealth, because all the exploits made before the independence of these States were illegal and foreign, and therefore hostile to the development of the Peoples of these countries. Now that everyone knows their rights, the great powers must negotiate economic and political treaties that promote respect, dignity and freedom for the Cuban, Venezuelan, and Zimbabwean Peoples. This is the only way that is compatible with international peace and security.

Long live the friendship between Peoples!

A French translation of this presentation is available.

My name is Hamdi Omar.  I am in charge of external relations of the Sahrawi – Polisario Youth League (UJSARIO).  Polisario Youth League UJSARIO sends its strongest solidarity and support to All-African People’s Revolutionary Party and highly praise it for the annual commemoration of the African Liberation Day.  The liberation of Africa is still unfinished and we’re reminding comrades as long as the people of Western Sahara are under illegal military occupation by France prodigy in power in Africa the kingdom of Morocco.

The liberation of Africa will remain incomplete as long as many African countries and leaders are still receiving orders and directives from their former colonizers against their own people’s interests.  Within the same context, UJSARIO strongly and firmly support the legitimate rights of Zimbabwe, Cuba, and Venezuela, to freedom, for independence and civility.  We strongly condemn the illegal, immoral, and injust sanctions imposed on these countries and we consider that these sanctions are not only blatant violations of the international law and immoral interference in internal affairs and a criminal economic embargo that threatens the people’s rights and beliefs but also an ongoing crime against all nations and against humanity.

Thank you very much, the best comrades in the world.

My name is Lewis Maghanga from the Revolutionary Socialist League. The RSL is a Socialist organisation based in Kenya, committed to a Socialist Revolution and the Liberation of the people of Africa.

The RSL is organising the African Liberation Day in conjunction with comrades from the All African People’s Revolutionary Party as well as other organizations. For this year, the theme is ‘African Liberation and Unity for the defeat of Imperialist Sanctions and the COVID-19 pandemic’. For the ALD commemoration, we are organising a zoom webinar, through which we shall engage the participants in the event. The webinar will also be broadcasted live on Facebook to increase our outreach. This will be done in addition to the online campaigns scheduled for before and after the 25th of May.

To the comrades of the AAPRP, receive our greetings of solidarity and friendship. Forward to a United Socialist Africa!

Revolutionary and Pan-African Greetings.  We are the Pan-African Revolutionary Socialist Party.  We’d like to begin by first thanking the All-African People’s Revolutionary Party for their many years of consistent, revolutionary work and struggle on behalf of all African people, those at home and those abroad.  A-APRP has been vigilant in preparing our people for the African Revolution, teaching them that we’re all African people no matter where we’re born in the world, that our enemy is capitalism no matter how it chooses to manifest itself.  That our objective is Pan-Africanism, a unified, socialist Africa.  That our strategy is organization and that our tactics at this time is political education that ultimately leads to armed struggle.

We are also thankful to A-APRP for its efforts to forge links with revolutionary Pan-African organizations around the world.  We, in the Pan-African Revolutionary Socialist Party, have been fortunate to work together with A-APRP on many projects including our Africa Must Unite Podcasts; our 2020 Calendar – “Revolutionary Pan-African Socialist Organizations:  Those at Home and Those Abroad!”; and our paper presented at the 60th Anniversary of the All-African People’s Conference in Ghana in December 2018, entitled “Heed the Call: The Necessity for an All-African Committee for Political Co-Ordination”.

Today, we are here to commend the All-African People’s Revolutionary Party for the focus of this year’s African Liberation Day.  Sanctions are war, for we know that the results of sanctions are the same as if the capitalists put its entire armed force in the middle of Zimbabwe, Cuba, Venezuela, Iran or any other country.  We are not, and never will be, fooled by the capitalists’ tactics and we must shout our vehement disapproval of them, and our plans to destroy them, as often as we can.  Kwame Nkrumah wrote the following in a letter to Reba Lewis on April 13th, 1969:  “The imperialists and neo-colonialists must know that we are not asleep.  We know they are our enemies and we must prepare to face them anyhow, in whatever way we choose.  The important thing is that we must make them know that we know them.  Know the enemy, and prepare to confront him.”

This is why our Party says that Corona is the Virus; capitalism is the Pandemic.

A unified, socialist Africa is not only possible, it’s on the horizon.