We hope that this reaches you in the best of health and revolutionary spirits! We are proud to share with you the 2020 edition of this ALD tabloid in line with the theme for this year:

Juventude Africana Amílcar Cabral – JAAC (or Amilcar Cabral African Youth) held an African Liberation Day Ideological Seminar in the capital of Guinea-Bissau on 22 May 2019. Among those in attendance was Revolutionary Pan-Africanist Sainey Faye from The Gambia. The seminar was held at the Amilcar Cabral University. On 23 May 2019 there was an ALD Radio Programme on a Revolutionary Pan-Africanism show that Comrades Imani (JAAC/PAIGC) and Sainey participated in. Sainey has also visited with Legendary Hero/Liberation War Veteran and Organiser Teodora Gomes

Call for our demonstration on the African Liberation Day #JusticeForMbobda

On the 21st of April 2019, the African student Tonou Mbobda was killed by a racist and brutal assault by “security“ forces of the University Hospital Hamburg (UKE), Germany. The act of violence occurred on Sunday morning in the Department of Psychiatry, at building W37 of the UKE. Tonou Mbobda did not want to take the prescribed medication and on that morning he went out of the building. He had volunteered to go in to the hospital and was free to leave the building whenever he wanted.

According to eyewitnesses, Tonou Mbobda sat outside on a bench and relaxed. He had shown no aggressive behavior when the staff of the UKE „Security“ tackled him and threw him to the ground. The witnesses also report that he was tortured and kicked with their knees until he lost consciousness and was given an injection. He was also fixed and strangled on the ground. He complained that he could not breathe before losing consciousness. After unsuccessful resuscitation attempts on the ground, Tonou Mbobda was taken to the emergency intensive care unit of the UKE in an ambulance, where the resuscitation attempts continued.
The machine which enabled his heart to beat again in the meantime, was shut down on Friday 26th of April, and his death was officially confirmed.

After the attack, the UKE made no effort to contact the family of Tonou Mbobda, to inform them and to provide clarification. On the contrary: the UKE first spoke publicly about a „medical incident“ and refused to give further communication concerning the incident. They quickly began to justify the crime: they degraded and criminalized the victim, drawing the picture of a „dangerous“ and mentally ill black man, who was himself responsible for his murder. From the beginning, they denounced and stigmatized his fellow patients and denied the perceptual ability of the various witnesses. They relativize the violence and protect the perpetrators until today.
Instead of investigations, the hospital management pretends that Tonou Mbobda, who went to the UKE without physical pre-existing conditions, could have died without the attack. The medical and political leaders continue to be indifferent, defensive and have still not come to any conclusions.

Structural anti-black racism is the main reason for the killing of Tonou Mbobda, and the handling of the crime. The Hamburg University Hospital is a white institution – racist practices and the corresponding impunity of the perpetrators already have a historical continuity there.Iin the 20th century, the skulls of Africans and other oppressed peoples who were murdered, were gathered and kept in the UKE.

We also recall more recently, Achidi John, who was tortured to death in December 2001 by a doctor of the UKE. He was forcibly fed an emetic by a probe. Also in this case, up till today no responsible person has been held accountable. Instead, they have been promoted: Politically responsible persons like the former senator for domestic affairs, Olaf Scholz, is now German Vice Chancellor; those involved from the UKE are now the director of the institute (Klaus Püschel), and senior physician (Ute Lockemann) in forensic medicine. Ironically, the body of Tonou Mbobda is going to be examined in this same forensic department of UKE.

Any one of us People of African heritage could have been a victim of these crimes, which reflect the racist and inhumane perception of us as “aggressive“, “violent“, and generally suspicious . Regardless of external circumstances or personal situations, we are then subjected to brutal or even lethal force instead of compassion. Racism is a system of dehumanization and hierarchization. It is the ideology of white supremacy, a conceived justification for violence, exploitation and oppression, violence through enslavement, colonialism and imperialism.

The fight for justice for Mbobda is inextricably linked to the daily and worldwide struggles against a whole system of racist oppression. This system has now claimed another victim and we mourn with the entire family and friends from all over the world. We will honour the memory of the murdered. It is our task to provide clarification, justice and responsibility, to defend ourselves against the systematic racist oppression at all levels in this society, as well as any stigmatization and coercion of mentally burdened people and to advocate for the clarification of racist and inhumane crimes.

The Black Community calls for a nationwide demonstration in memory of Tonou Mbobda on African Liberation Day, May 25, 2019!

The African Liberation Day is celebrated annually in large parts of Africa and among the African Diaspora. It is an expression of our ongoing quest for liberation, unity and self-determination.
On May 25, 1963, numerous African states founded the „Organization of African Unity“ in Addis Abeba (Ethiopia), calling for the „African Liberation Day“, later to be called „Africa Day“. This day is an expression of the African struggle for justice and anti-colonial resistance.
On this day, the combined strength of the unity of all Black people on the Continent, and in the Diaspora, is the focus of our daily and diverse struggles. The work of complete liberation and unification of Africa is far from over. Furthermore, in Africa there are still boundaries that were created by the former colonial masters in 1884/1885 in Berlin. During this age of neo-colonialism, our natural resources and labor are still exploited by foreign powers and the elites.

Presently, Black people around the world are being disrespected, abused and killed.
To fight back, we must join forces, stand together, enlighten ourselves, coordinate our abilities and shape our lives with self-determination and in solidarity – no one will do anything for us, we must take it into our own hands!

Only unity and the collective struggle for freedom give us the means to expose the system of white supremacy. To expose their racist crimes, to hold the perpetrators accountable, to demand reparations and to bring about justice and peace for our murdered ancestresses and ancestors.

In times of global warfare, economic plundering, continued environmental destruction, and the emergence of openly racist and inhumane positions, we encourage all Black people and people of solidarity to exhibit a forceful presence on this day against racism and xenophobia, heteronormity and repression, exploitation and oppression, and continuous global destruction of our culture and environment.

TOUCH ONE – TOUCH ALL!

Instead of surfing the Internet to read capitalist lies, why not use it instead as a way to access revolutionary truths found in revolutionary primary sources?

Almost all revolutionary and progressive parties have their own websites, Facebook, Twitter, etc.. Below are just a few of them.

Cuba: (daily in Spanish and English as well almost daily in French, Turkish and Portuguese)

World News:, (especially Africa, Asia and Latin America.24 hours per day in Spanish and English as well almost daily in French and Portuguese);

Of course, you should regularly consult the A-APRP website 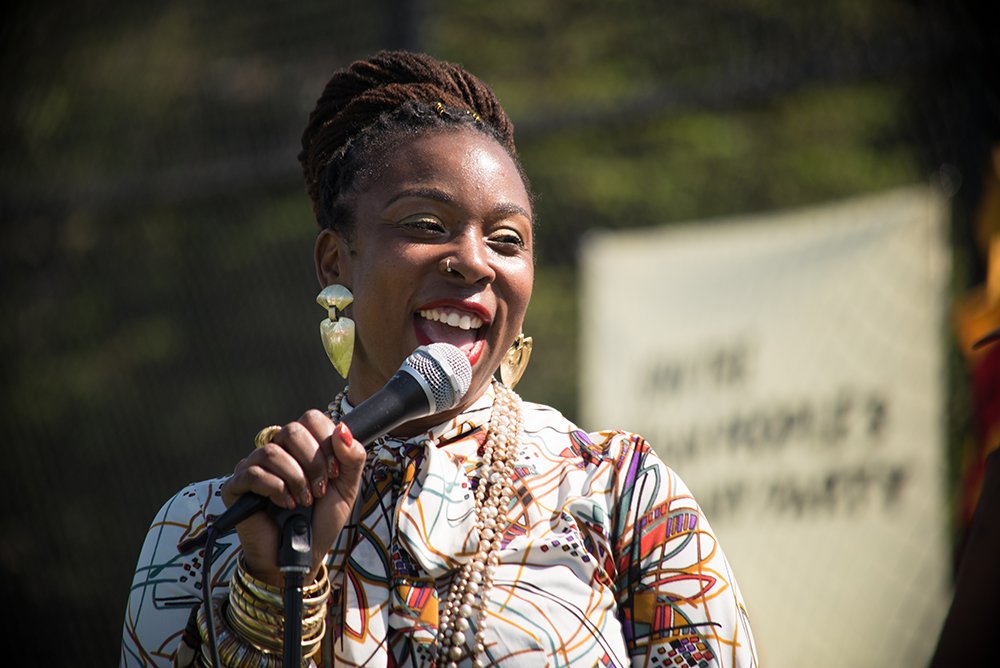 Candice is a international singer/songwriter, producer, educator, natural beauty advocate, activist, global citizen and Pan Africanist who travels the world making music and speaking to unify the African diaspora.
Her mission is to live in a world where every human being can manifest their highest selves free from oppression and judgement. She believes that all over the world, so many of people are rich seeds planted in soil that has been stripped of its nutrients by colonialism, slavery and other systems of oppression. Her aim to restore humanity in all that she does. She produces art meant to provoke thought and challenge beliefs, to make people FEEL. She travels the world exchanging knowledge about the power of art as a tool for social transformation.