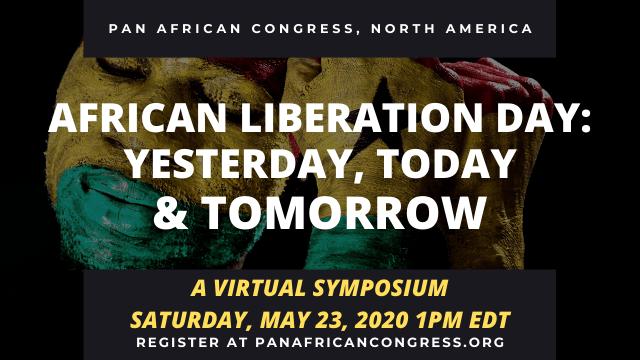 In the midst of a global pandemic, we (the Global Pan African Movement) commemorate African Liberation Day. In the beginning, African Liberation Day was meant to celebrate the independence of African nations across the continent. The celebration of African Liberation Day had originated in New York among Garveyites. This celebration was taken up by Kwame Nkrumah of Ghana when Ghana acceded to its independence in 1957.  At the All African Peoples Conference in 1958, it was agreed in Accra that one day in May would be set aside as a national day of remembrance for African Freedom Fighters. When the Organization of African Unity was formed in 1963, May 25 had been designated as Africa Day.

The COVID-19 global pandemic emphasizes the necessity of global Pan African solidarity. For many, this pandemic is unprecedented but for Africans on the continent and across the Diaspora – we have long known the deadly impact of racism, medical apartheid, unbridled capitalism, etc. Now, we face COVID-19, a new virus coupled with the familiar virus of Western imperialism and white supremacist systems, disproportionately devastating our communities. In Brazil, thousands are dying due to lack of testing and treatment – many of these deaths among the Black communities. In the United States, a similar circumstance is unfolding with a disproportionate number of deaths coming from Black communities. These illnesses and deaths are not due to a biological predisposition. They are due to past and current social injustices steeped in anti-Blackness and Afro-phobia.

From the favelas in Brazil, the streets of Nigeria, the settlements in Kenya, and the corners of America – the struggle continues.

This African Liberation Day, we will continue to move forward, centering and uplifting African solutions for African people. Embracing sankofa in order to learn from our journey and use our history to establish transformative change. We embrace Ubuntu recognizing that our humanity and future is reliant upon one another. And we embrace Pan Africanism, understanding that our collective survival is dependent upon it, in order to survive. On this call, we reaffirm our solidarity while focusing on African solutions and uplifting work in progress.

H.E. Quartey Thomas Kwesi, born on 17 December 1950, is a Ghanaian national with over 35 years of experience as a diplomat. He was elected as the new Deputy Chairperson of the African Union Commission. Ambassador Quartey has served in various capacities in Ghana’s Embassies and High Commissions in Cotonou, Cairo, Brussels, Havana, and London. He was also Permanent Representative to the Ghana Mission to the United Nations in New York. He served as deputy Foreign Affairs Minister under the former President John Mahama’s government, and was Secretary to the President. Ambassador Kwesi has gained experience in the area of financial/economic negotiations with the European Commission, expertise in investments and providing advice on Administrative and International Law in his subsequent career as the Provisional National Defense council, State Committee for economic Co-operation, in Accra Ghana.The Deputy Chairperson assists the Chairperson in the execution of his function for the smooth running of the Commission and is in charge of administration and finance. The Deputy acts as the chairperson in his absence.

Julialynne Walker, Chair, North American Delegation, Pan African Movement has over 30 years of experience working with movements for social change, beginning with the civil rights movement, continuing with African liberation struggles and is still engaged in consolidating the Pan African Movement. She attended the 7th Pan African Congress in Dar es Salaam (1974), served on the Organizing Committee for the World Conference Against Racism, Xenophobia and Related Intolerances (2001), was a presenter for the Second Meeting of Intellectuals, Cultural Festival with the People of Africa in Caracas, Venezuela (2009), a Technical Expert for the African Union Diaspora Experts Meeting in Johannesburg, South Africa (2011, 2012) and Rapporteur for the 8th Pan African Congress-Accra (2015) among other engagements. Current passions include food injustice – the connections between healthy food, growing healthy food and marketing healthy food, especially within traditionally African-American communities as an outgrowth of her international public health and African Diaspora work. She appeared as a TEDx presenter on this topic last year.

Mahder Serekberhan is an MA student enrolled in Syracuse University’s MA Pan African Studies program. Her research interests include African social and women’s movements, Sudanese grassroots mobilization, and African transformational politics and organization. Mahder was born in Ethiopia and lived in Malaysia before coming to the United States. She has worked with research institutions and a women’s organization in Ethiopia. Mahder also spearheaded Linn County’s first Expungement and Resource Clinic in Iowa, which was meant to alleviate the disparate burdens faced by formerly incarcerated people of color. She is currently serving as president of Syracuse University’s African Graduate Students Network (AGSN) and hopes to complete her MA in 2021.

Dr. Ikweba Bunting lived in eastern and southern Africa for almost three decades before returning to the US in 2002. Ikaweba Bunting, who earned his PhD from the University of Whales U.K. , lived and worked in humanitarian assistance sectors for the Danish Association for International Cooperation, the British NGO, Oxfam, The Mwalimu Nyerere Foundation and the Tanzania Film Co. During the Genocide in Rwanda as the Region Policy and Communications coordinator for Oxfam (UK) he was instrumental in efforts to mobilize the international community and the United Nations to recognize that what was happening was in fact a systematically planned genocide. Bunting as a member of the Burundi Peace Negotiation Facilitation Team was an advisor on Civil Society in the Great Lakes region and Rapporteur General for the Facilitation under former Presidents Julius Nyerere of Tanzania and Nelson Mandela of South Africa.

Professor Patricia Daley is Professor of the Human Geography of Africa and Director of Undergraduate Studies. She is also Vice-Principal and The Helen Morag Fellow in Geography at Jesus College, Oxford. She served as the University Assessor (2015-2016) and was co-founder of the Oxford University Black and Minority Ethnic staff network. She sits on the University’s Academic Conduct Panel.

Her previous academic appointments were at Dartmouth College in New Hampshire, Loughborough University and Pembroke College, Oxford. She has taught a range of human geography topics, as well as specialist courses on African societies and environments. At Jesus College she held the administrative offices of Tutor for Admissions (1999-2002) and Tutor for Women (1998-2004). She has sat on various College committees, including the Academic Committee, Disciplinary Panel, and the Accommodation, Catering and Conference Committee (ACC), and chaired the Staff Liaison Committee. As Vice-Principal, she chairs the Personnel and ACC committees and the Equality and Diversity Working Group.

Jessica Ann Mitchell Aiwuyor is a publisher, cultural storyteller, and communications specialist. She is the founder of Our Legaci Press and Centered Voices, a Pan Africanist initiative centering Black and Brown voices through all forms of media, communications, publishing, and creative arts. Her Our Legaci blog, about African American cultural heritage and ethnicity, has reached over 2 million readers worldwide and has been published and cited across a wide range of publications including Huffington Post, the Business Insider, MSNBC, LA Progressive and TV One’s “News One Now.” Through her communications work, she has helped to shift the political and cultural landscape at Greenpeace USA, New Organizing Institute, Megaphone Strategies, Fitzgibbon Media, the National Fair Housing Alliance. She has a Master of Science in Public Relations and a Master of Arts in Pan African Studies both from Syracuse University.

Humberto Brown, MA is Director of Health Disparities Initiatives at the State University of New York Downstate Medical Center in Brooklyn. In this capacity he is assigned as a loaned executive to the Arthur Ashe Institute for Urban Health, an independent 501©3 organization that partners SUNY Downstate Medical Center and the Brooklyn Borough President’s Office on community based participatory research. Prior to his tenure at Downstate, Mr. Brown held positions in the psychiatric division of Harlem Hospital, where he helped create a cultural sensitivity and education program for psychiatric residents and other mental health workers. Since 1994, Mr. Brown has been part of a team that trains mental health workers and psycho-therapists to be aware of their own racial, ethnic and class identities and, thus, aware of the attitudes and assumptions informing their perceptions of Latin American and Caribbean peoples.

English version: JESUS ​​ALBERTO GARCIA, San Jose de Barlovento (1954). C.I. 4168353. I study Education at the Central University of Venezuela and the Simon Rodriguez University. Currently studying for the Doctorate Latin American Art and Culture at the Libertador Experimental University. He has taken courses on Human Rights at the Institute of Human Rights in Costa Rica. He has served as a diplomat, researcher, activist, lecturer, and writer on African, African American, and global geopolitics issues.