The Kwame Ture Black Star of Labor Award (KTBSLA) began as the Black Star of Labor Award in 1987, with Assata Shakur being the first recipient. Following the transition of the immortal Kwame Ture to the Ancestors in 1998, the award was renamed after him. Kwame Ture, formerly known as Stokely Carmichael, spent his entire life in service to African people and all of humanity. This service was manifested in his tireless work to organize African people for revolutionary change against capitalism imperialism and white supremacy and for Pan Africanism: the total liberation and unification of Africa under one unified socialist government.

The PAIGC (African Party for the Independence of Guinea and Cape Verde), founded on September 19th, 1956, is the only African party that declared its independence unilaterally, i.e., without negotiation. It also had its own elections for positions in government in 1973 that included people who were not members of the party to form its National Assembly (ANP). Forty percent of the National Assembly was from the general population. It also has declared to build the AACPC by becoming one with the AAPRP.

Many of its members are also members of the AAPRP and are Cadre, Pre-Cadre and Work-Study including the president and the Youth Wing president Dionisio Pereira. Many cadre are in the Youth Wing and have participated in African Liberation Day (ALD) and Pan-African Women’s Day programs. Also, the President of the PAIGC has given keynote addresses at our ALD the last two years—2020 and 2021.

Currently, the PAIGC is trying to keep Guinea Bissau from being turned into an enemy held territory by resisting the attempted takeover by the illegal President of the government and his collaborators. The masses have been on strike in the hospitals and other key government institutions in resistance to the illegal President and the military who are aligned with him. There have been beatings, killings and other attempts to intimidate the masses of the people but the masses refused to accept these people who have tried to take over since the illegal elections of March 2019. 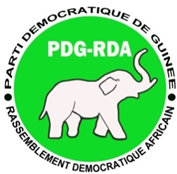 The Parti Démocratique de Guinée Rassemblement Démocratique Africain (Democratic Party of Guinea/African Democratic Rally) founded on May 14,
1947, was the decisive force in the victorious fight against colonialism and the construction of the revolutionary Guinean nation. We are honored to present the Kwame Ture Black Star of Labor Award to the PDGRDA as we also celebrate with them their 75th anniversary. The PDG-RDA has blazed the revolutionary trail, modeling for us democratic and collective leadership with the almighty People at the front, organizational discipline, the full participation of women and resolute determination to fight for a unified, socialist Africa. Through the ups, downs and curves of revolutionary struggle, the PDG-RDA stands!