The Mawina Kouyate Daughters of Africa Award was created to honor the memory and achievements of Mighty Daughter of Africa, Mawina Kouyate. Sister Mawina was a founding member of the All-African Women's Revolutionary Union (A-AWRU) and made an excellent contribution to the overall development, consolidation and expansion of the A-APRP. She dedicated 29 years of her life to building the A-APRP and A-AWRU and crossed into the ancestral realm in September 2002.

The MKDOAA is awarded each year to an individual and/or organisation that has activity worked for the struggle for the advancement of women's revolutionary advancement and the advancement of humanity. Some previous recipients of the award are Wangari Maathai, Assata Shakur, Berta Càceres, Madame Hadja Andrèe Toure, Mama Charlotte O'Neal, Piedada Esneda Córdoba Ruiz, Rasmea Odeh and others.

Marielle Franco, a Rio de Janeiro city councilor and member of the Socialism and Liberty Party (PSOL), was known for her stand against racism, homophobia and police violence in the favelas of Rio. Born and raised in a favela, one of the poorest sections in Rio, Brazil, Franco fought all the odds, earned a masters’ degree, and chose to become an elected councilor who worked tirelessly to promote the rights of black women, LGBTI and young people.

As the country moved more toward the far right, Marielle was assassinated by “former” policemen. Thousands of Brazilians took to the streets to protest this official murder of the Brazilian political activist – a black, gay single mother – who was a fearless fighter in a country mired in racism and inequality. 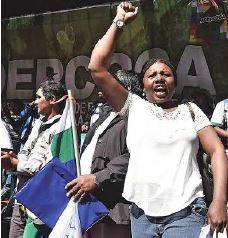 Elena Flores is a highly respected Afrobolivian and union leader. She began union work in her youth, carrying out many leadership roles in the Association of 35,000 coca leaf farmers of the Yungas, 5,000 feet below the city of La Paz. She is a strong labor leader and profoundly dedicated to the well being of women.

Since the 2019 coup in Bolivia, Flores has been at the forefront of denouncing the Añez regime's militarization, harsh repression and disregard for democracy. She vows to protect and unify her unionized, campesino, Indigenous and Afrobolivian region. Thus, Elena Flores, the elected union president of Adepcoca (the Departmental Association of Coca Producers) and a single mother of young children, has been imprisoned since March 4, 2020 under deplorable conditions. Organizations, movements and individuals from around the world have denounced the unjust incarceration of trade union leader Elena Flores and other women political prisoners and are demanding her immediate release.