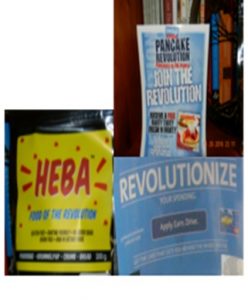 Big businesses use the term “revolution” to claim that everything from soap to cars to pancakes are better than their competition. Not just a little better but extremely, drastically better. This is all an effort to get people to buy more stuff – the stuff that makes more money for big businesses. The claims are largely lies.

There are also many people who call themselves revolutionaries and who struggle with all of their might to make a drastic improvement in society. They want a social revolution that brings about and end to capitalism because it is capitalism that gave us slavery, the slave trade exploitation of indigenous people from the Americas to Australia, colonialism in Africa, apartheid, and today neo-colonialism in the Americas, Africa and Asia. Capitalism is based on a handful of people (less than one percent of the population) owning and controlling the world’s wealth. This inequality in wealth ownership has led to billions of people living in poverty and suffering hunger, disease and insecurity.

In South Africa, many people emphasize extremes. Something that is very big is called “Big Big.” When a mother wants to do something right now, she says: “Now Now!”

Because the capitalists control the world’s wealth and use this wealth to maintain power, revolutionary organizations seek to drastically change things as soon as possible – NOW, NOW!

Today, the world is faced with big problems of oppression – BIG, BIG problems. Apartheid has ended, but South Africa today has the highest level of inequality in the world. Two families (Oppenheimers and Ruperts) own more than the poorest half of the country. Globally technology advances bring more corporate profit, but come with reductions in jobs. The people suffer. USA and NATO efforts at regime changes in Libya, Syria, Iraq, Venezuela, Zimbabwe and Cuba bring global instability. The people suffer. The capitalist sponsored Zionist USA Congress votes to give Israel 37 billion dollars in military aid over ten years. Israeli aggression in Gaza and the West Bank kills hundreds and destroys the homes and livelihood of millions. The people suffer.

During the colonial era, Ghana was controlled by Britain, Senegal by France, Angola by Portugal and South Africa by apartheid. With the end of colonialism, the majority of people live in countries where the government is no longer decided by the elite minority of Europe. Today, most governments are elected by the people. However, the options presented to the people rarely represent their interests. Leadership and governments sponsored by capitalists dominate the landscape. After elections this neo-colonial leadership is obligated to do the bidding of their sponsors. They do not serve the interests of the people.

All people of African descent are African and owe allegiance to Africa. Some people believe only people who live on the African continent are Africans. For example there are some who suggest that so-called black people in the Americas are “Americans.” This implies the slave trade, slavery and Jim Crow oppression somehow transformed Africans stolen from their home continent into a new type of human being. This is not only ahistorical but also defeatist. The borders that divided Africa into over 54 nation-states could not divide African culture. The more than 100 languages spoken by Africans are not representative of different cultures, but they reflect the diversity and richness of a single African culture.

The people of the world will win the war against capitalism, imperialism, zionism and neo-colonialism if they all do their part. When Africans succeed in liberating Africa and uniting it under a single socialist government, it will be an advance for struggling people all over the world. It will cause extraordinary positive changes for Africans living outside of Africa.

Join an organization fighting for African people.
Divided by Colonial Boarders, United by History and Culture – Africa Must Unite!

If you are already in a revolutionary organization working for African unity, check out the Worldwide Pan-African Movement