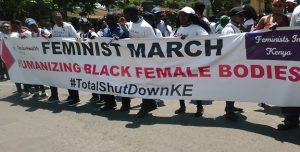 The valuable contributions of African women to the fight to liberate African people cannot be denied. Julia Cooper, Amy Ashwood Garvey, Amy Jacques Garvey, Queen Mother Moore, Claudia Jones, and many other African women have set the tone for many African liberation struggles. African Women built militant women’s organizations inside and outside the national liberation parties and movements. These organizations included, among many others: Pan-African Women’s Organization PAWO, Democratic Union of Women Guinea (UDEMU), Imbeleko Women’s Organization, and the National Council of Women. It is perhaps not possible to list the many local and village organizations of African women.

The full engagement of women in struggle is nothing new. Women fought in every phase and in every way against the advance of slavery and colonialism. They served as leaders (e.g. Me Katilili, Nehanda, Nzinga) and as anonymous freedom fighters in struggles like the anti-pass campaigns in South Africa; the formation of the Bantu Women’s Organization and the Federation of Women in the 1950’s; and the 1929 anti-colonial women’s rights revolt in Nigeria. Women made up one third of those who engaged in armed struggles in Eritrea and Zimbabwe. They fought in Algeria, Angola, Guinea Bissau, and Mozambique. Nanny in Jamaica, Carlotta in Cuba, Harriet Tubman in the U.S. and the African women participating in the first Pan-African Revolution in Haiti all led in the resistance to slavery.

Notwithstanding the struggles of African women, patriarchy remains a fact of life even within progressive and revolutionary African organizations. Patriarchy is a backward and exploitative set of ideas and practices that preserve hierarchical relationships that use formal and informal institutions like the government, religious, educational, and cultural institutions to place and keep men in dominant positions. Even socialist revolutions which ushered in progress for women in the workplace, education, family, law and government have not resolved the question of gender oppression.

European colonialism, though patriarchal, did not introduce patriarchy to Africa. Patriarchy in Africa is a holdover from pre-colonial periods in Africa. Patriarchy only became worse in Africa under colonialism. These exploitative ideas and ideologies are “socially” constructed, and like any dangerous construction these backward ideas must be demolished in our culture/societies and rebuilt by revolutionary ideas. The social revolution called for by the All African People’s Revolutionary Party (A-APRP) and All African Women’s Revolutionary Union (A-AWRU) does not just challenge economic inequalities of class but digs deeper and looks at oppressive cultural norms perpetuated by those who benefit from the exploitation of people based on gender, sexuality, race, ethnicity, nationality, religion etc.

The defeat of patriarchy can’t be achieved outside the struggle for power. Neo-colonialism allows for the continued theft of the resources of formerly colonized territories. Foreign powers control and exploit the best agricultural land and resources (iron, gold, diamond, titanium, coltan, oil etc.) in Africa. This resource theft deprives the working masses of necessities like education, healthcare, water, housing and infrastructure. This has the heaviest impact on women and children. There are additional challenges to women posed by domestic violence, political exclusion, unequal wages, lack of healthcare, militarism, water theft, patriarchal inheritance laws, attacks on reproductive rights, ritual cutting, human trafficking, marital rape, lack of sexual and gender choice and extra-judicial killings. 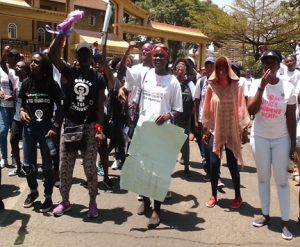 Revolutionary Pan-Africanism expresses the nation/class and gender struggle of African people. Revolutionary Pan-Africanism is not only fighting for one unified socialist Africa but also for an end to exploitation. We are fighting for the complete liberation of Africans everywhere, and African women like other nationally oppressed working/class women are on the frontlines of this struggle. The liberation of African women requires the defeat of settler-colonialism and neocolonialism, and the construction of socialism leading to a non-exploitative society (communism).