“We can’t ignore the fact that the same imperialist forces which exploit and subvert our independent states and which oppress our people in the remaining colonial enclaves in Africa, are the same forces which breed armed conflicts, civil strife and economic impoverishment on other continents.” Kwame Nkrumah

Who or what is this enemy that causes so much pain for so many? It is a process of empire-building whereby capitalists extend their reach beyond their own national borders and dominate, steal and otherwise exploit the natural resources and labor of others. This is commonly referred to as “imperialism” and the culprits that drive it include, among others, the United States, the United Kingdom, so-called Israel, France, the European Union, together with feudal partners in Saudi Arabia, Bahrain, the United Arab Emirates, Qatar and all their neo-colonial junior partners that cooperate with imperialism in Africa, the Americas and Asia.

Imperialism dominates oppressed regions with an iron hand. It coordinates military force with NATO, U.S. Central Command (CENTCOM), U.S. Africa Command (AFRICOM), and SOUTHCOM in Latin America and the Caribbean. These forces work with Zionist Israel to dominate the military training and security agencies of neo-colonial countries in Africa, the Caribbean and Latin America. They strategically control drone bases, airstrips, and staging areas while maintaining military personnel throughout these areas under the guise of counterterrorism. Yet it is these forces that have inflicted terror by dropping 40,000 tons of bombs in Libya alone, and with drone strikes in Sudan and Somalia. There have been countless invasions of Cuba, Haiti, Grenada, Panama, and numerous assassinations and coups targeting a series of African heroes from Patrice Lumumba to Muammar Gadhafi.

Imperialism does not rely only on military force. U.S. Presidents Obama, Trump, and Biden have all used blockades and economic sanctions. The U.S. and E.U. have sanctions on 39 countries across the globe. They have nine in Africa alone against Sudan, Burundi, Congo, Mali, Libya, Zimbabwe, Somalia, South Sudan and the Central African Republic. Sanctions kill by causing the devaluation of currency, and an inability to get access to medicines, food, fuel and other much needed necessities for the prevention of death, disability and starvation.

The challenge may be daunting, but imperialism can be defeated with unity. Current efforts to establish unity have been underway for decades. The Transcontinental Conference of 1966 assembled anti-colonial forces from Africa, Asia and Latin America. In more recent years, global resistance to imperialism has been evident in the continuing development of relationships among the former colonized countries of the world, particularly in meetings between Africa and Venezuela that were initiated by Hugo Chavez, as well as the bi-annual Africa – Cuba Summits.

The Bolivarian Alliance for the Peoples of Our America (ALBA) includes Antigua and Barbuda, Bolivia, Cuba, Dominica, Ecuador, Nicaragua, Saint Vincent and the Grenadines, and Venezuela and the African Descendants Movement. It is organizing African, indigenous, and working-class peoples of Latin America and the Caribbean.

Finally, the recent elections in Venezuela and Bolivia have strengthened anti-imperialism not only in the Americas, but also around the globe. The superiority of this socialist unity against capitalist imperialism is evident in the fight against Covid 19. In the leading imperialist nations, there are Covid-related deaths in the hundreds of thousands. Not only have socialist countries like China and Cuba had substantially fewer deaths, but they have also provided aid to other countries in the fight against Covid 19.

The call for Pan-African unity is an African-specific response to imperialism, and it is clear about not only what it is against but also about what it is for – the total liberation and unification of Africa under scientific socialism. Pan-Africanism calls for anti-imperialism, the right to self-determination of oppressed nations, socialist economics and humanism, environmental justice, and the end of all exploitation of humans by nation, class, and gender etc. Pan-Africanism stands for: the rights of those who labor, the reclamation of land and resources from settler and foreign control, people’s participatory democracy based on collective ownership and equitable use of national resources. 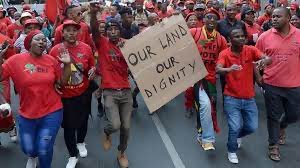 World-wide Pan-African Unity can be achieved with world-wide revolutionary organization. Kwame Nkrumah’s Handbook of Revolutionary Warfare makes the case for the organization of Pan-African revolutionary forces in Africa and around the globe. He was clear about the need for an All-African People’s Committee for Political Coordination (A-APCP) that can bring together Pan-African Parties in power and other parties still struggling for liberation. This A-ACPC is still needed to take World-Wide Pan-African Unity to the next level. The All-African People’s Revolutionary Party is working hard to make Nkrumah’s vision a reality. We invite you to join us in this struggle that is so vital to the liberation of Africans everywhere.